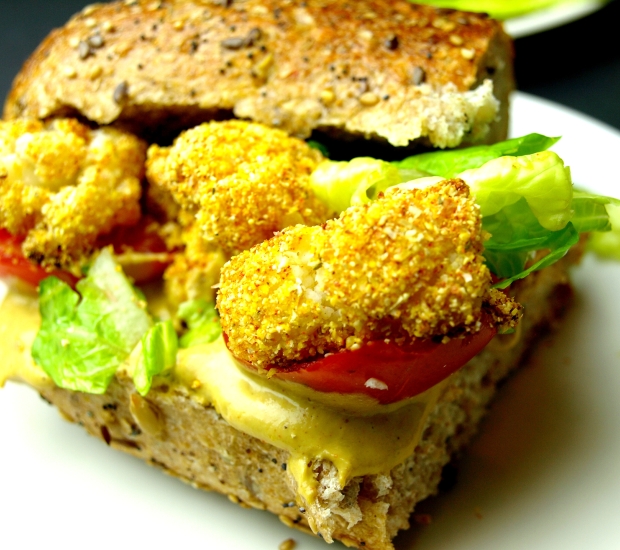 One of my favorite sandwiches back in the day was the classic Po’ Boy, a Louisiana/New Orleans favorite, complete with fried shrimp, french baguette, and mayonnaise-based remoulade sauce. Being from Michigan, I can’t vouch for the authenticity of the po’ boys I’ve had, but I can say that the best one I’ve ever eaten was at a small restaurant just outside of Chicago, that was in walking distance from where I lived for a couple of years. It’s been forever since I experienced my delicious favorite, and I decided it was high time I vegan-ized that bad boy… erm, po’ boy.

I have to thank Alex and Ellie over at the incredible blog, Vegan Bungalow, for inspiring me. I recently made their Pickled Cauliflower Fritters, which were amazing (just like all their recipes… check them out!), and my love for cauliflower was reignited! It had been almost two months since I made anything involving cauliflower. That week, however, I made cauliflower errything… cauliflower tacos, cauliflower steaks, cauliflower rice. My husband even remarked, “You’re really on a cauliflower kick lately, huh?” Hmm… you could say that. 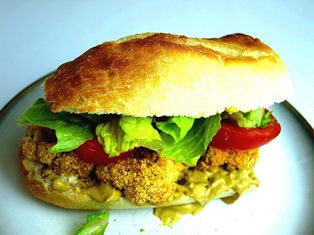 It was during one of those cauliflower escapades that I had this most amazing, shimmering, glittery idea to swap fried shrimp for crispy, cornmeal-coated baked cauliflower and stuff those tasty lil nuggets into a fluffy baguette with lettuce and tomato to recreate (and improve!) the classic po’ boy.

Of course a major part of the sandwich is dat sauce. I’d say the only tricky part of coming up with the recipe was changing up the sauce, which I have to admit really wasn’t all that tricky. Remoulade sauce is typically a mayo-based sauce with mustard, hot sauce, Cajun seasonings, and an array of other ingredients to give it a spicy, tangy, piquant flavor. Really, the sauce makes the sandwich. You gotta have the sasssss. Homemade cashew cream takes the place of mayo in my version, but you could always use a store-bought vegan mayo like Veganaise instead.

This recipe makes a lot of sauce, so I recommend eating it on anything and everything. I found it was a delightful accompaniment to a big plate of oil-free crispy baked fries. I love some good dippage.

Traditionally, po’ boys are made with a French baguette, but I also tried out a whole grain version, and even skipped the bread all together and arranged my sandwich fillings in lovely romaine lettuce boats. I imagine a sourdough baguette would be pretty tasty as well. Udi’s makes a gluten-free French baguette, and I’m sure there are other brands that do as well.

If you love a good sandwich, and want to bask in all the goodness of a plant-based po’ boy, then definitely give this recipe a try!

2 small French baguette loaves, or other bread of choice, or large romaine leaves

For the crispy cauliflower coating:

2. In a shallow bowl, mix cornmeal and Cajun seasoning. In a separate bowl, mix the plant milk, chickpea/garbanzo flour, flax seed, and add a dash of salt and pepper. Whisk the mixture until no clumps remain. It should be the consistency of whisked eggs. Add a little more flour or milk if needed to thicken or thin it. Now, dip the cauliflower florets into the “egg” mixture and then immediately roll into the cornflour/spices, and set on the prepared pan.

3. Bake the florets for about 25-30 minutes until golden brown. While they’re baking, prepare the sauce.

Add all ingredients to a blender and blend until smooth.

Instead of cashews and water, you can substitute about 1 1/4 cups vegan mayo.

Assemble the sandwiches with the sauce, tomatoes, cauliflower, and lettuce. Enjoy!