Well winter finally arrived here a few days ago, now that Christmas Eve is only a blink away! Today, however, it is raining cats and dogs and the temperature is creeping back up. It’s supposed to be near 50 on Christmas, unheard of in Michigan! While it was getting chilly, all I really wanted to do was make soup and drink hot chocolate. Probably because for two months I’ve been waiting to be cold enough for these things to sound good! That’s just sad. I have a feeling January and February are going to make up for it.

When it does, and you’re shivering under your fuzzy blanket, you have to promise me you’ll make this soup. Also, when the inevitable cold/sniffles/flu goes around your office/school/household, do yourself a favor and cook a big pot of it. Growing up, there was nothing better than chicken noodle soup for when you were feeling down in the dumps. I made this several times before I was satisfied with its chk’n noodle soup-ness, determined to make it as delicious as the most traditional chicken noodle soup. Everyone needs a good noodle soup recipe in their arsenal and I’m so happy I finally got it right. 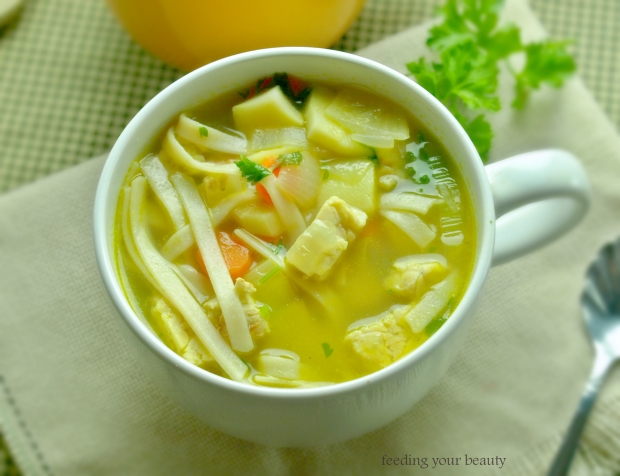 I’m confident that anyone, vegan or not, would love this veggie noodle soup! It’s comforting, flavorful, and loaded with tender vegetables and hearty noodles. I’ve used tempeh and vegan chik’n strips for the “chicken” and brown rice fettucine for the noodles. I love Better Than Boullion No Chicken Base  for the broth, but I’ve also used Celfibr Vegan “Chicken” boullion cubes. Both are vegan, but I prefer the flavor of the Better Than Boullion, it has a much more traditional “chicken noodle soup” flavor.

This soup comes together so easily, and it can be doubled if you want to freeze some for later, or you have a houseful of guests to feed. This is soup that kids will love! We’ve had our soup along with crackers, grilled cheese, or pb and j, fruit, or homemade muffins. Talk about an easy, crowd-pleasing meal idea over holiday break!