You guys, this is exciting. Today’s recipe represents a revolution in my kitchen. A discovery of epic proportions. The realization that a pot does not indeed need to be stood over, stirred, and stared into. I’ve heard tell the wonders of this contraption, but never did I believe it. I myself own not one, but two of these magical meal machines, and they both have served as dust collectors in my cupboard. No longer. The force awakens, friends. I finally learned how to harness the power of the Crock-Pot.

I’ve played around with my slow cooker a few times in the past, but this split pea soup is by far the yummiest creation to ever emerge from that sturdy ceramic pot. It’s so good in fact, that it has revived my enthusiasm for this fill-it and forget-it method of cooking. I mean really, what could be better than throwing in a bunch of healthy ingredients, plugging it in, and coming back 6 hours later to a perfectly cooked meal? The humble crock pot is sorely underappreciated. 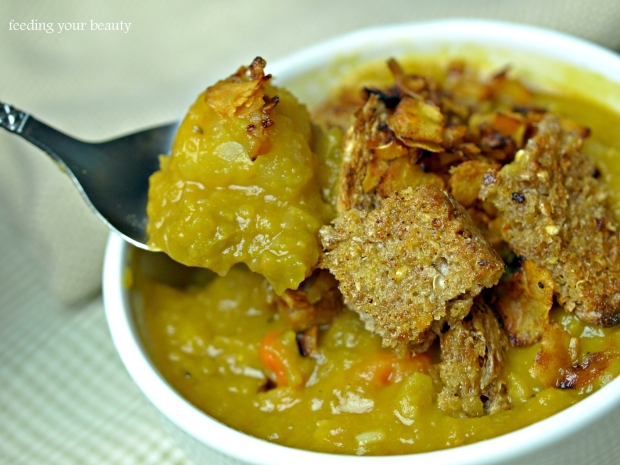 Also underrated? Split Pea Soup. I have to admit, split pea soup is not, perhaps, the most photogenic dish to capture. Don’t let its looks fool you. Thanks to this easy recipe, I now consider myself a bona fide split pea soup fan. This soup is filling, stick-to-your-ribs, chock full of protein, fiber, flavor, and is just plain cozy. This soup serves as the argument against the myth that plant based-food is “rabbit food.” No need to defend yourself with heated words, the next time someone starts blabbing about bunny food just smile and slip a spoonful of this hearty soup in their mouth mid-sentence. They might just have to eat their words, literally.

You’re going to want to warm up over the weekend with this hearty winter soup. Time to dust off that slow cooker and unleash its meal-making powers. May the force be with you.

recipe adapted from the cookbook Fresh From the Vegetarian Slow Cooker